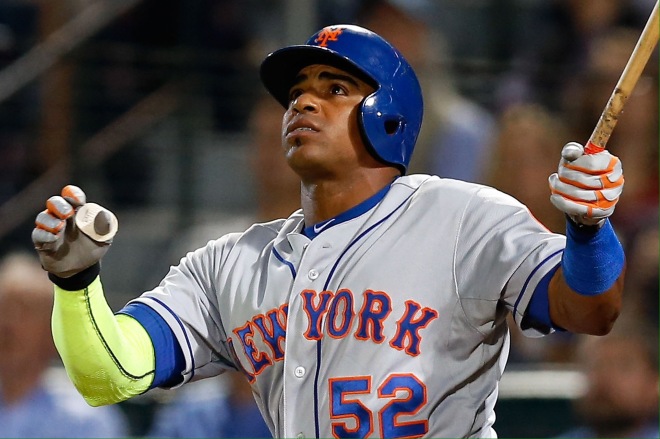 He is the truth.

Did you see the go-ahead dinger?

Did you see the laser rocket throw from the warning track?

Did you pay him yet?

Sidenote: The analysts are retaaaarded. They’re like, “derrrrp the Mets are back but the Marlins and Pirates are falling apart!” Ummmm, the Marlins lost Stanton and the Pirates sold at the deadline (I guess because they figured the Cubs & Cards had it this year and are looking to next season). Pay attention, fucktards. This shit ain’t random. The Mets are back because Yo is healthy. It’s not complicated.

Take a guess at what happened with the tying run on 3rd and 1 out. GUESS. Go on. Guess. Guess!

Mets BLOOOOOOOOOOOOOOOOW. When Cespedes isn’t in the lineup, and especially with Verrett pitching (who pitched fine), it’s not worth watching. Start the boycott now. Pay Yo.

By the way, why didn’t Terry just bring in Reed at the start of the 8th? Oh, because he’s sore? So you didn’t want to use him? But you ended up using him anyway? And he blew a late lead? Does that sound FAMILIAr to you!?!?

I’m watching the game and I’m thinking, “AAAAAnd we’re back to Mets baseball.” 2nd inning Nimmo overthrow. Call overturned correctly then Harvey pitching to 8 hitter so fucking greedy already down a run and with 1st base open…CRACK! Yo made a sweet bare hand play off the wall that meant nothing but was cool. Aaaaand Harvey let up a hit to the pitcher anyway.

So the OF got exposed early. Yo diiiid win a gold glove in LF and Nimmo is supposedly a CF. Grandy has no arm in RF. Back to Metsie baseball! Bad gameplan from the start! Collins is too busy with the ASG roster, I guess.

Nobody tried to calm Harvey down or talk to him after a long delay. Where’s TDA? Warthen? Collins? I think Rivera should be catching Harvey. He helps pitchers. Though TDA hit a dinger. Rivera hit a dinger on Sunday but it was wind-assisted big time.

4th inning: Bahahaha Harvey spikes an easy double play into the ground. Mets baseball!
But how quickly we forget: Jesus is back. Yoenis is back. Our bullpen is solid and the Fins suck. Everybody did a little something something and Yo delivered the capper. We’re so fucking hot right now. Carry it as long as you can.

*If we played this game right, it could’ve been an 8-1 laugher. But where’s the drama in that?? Metsie baseball!

**Also, tonight marks Reyes’ return to the team. Does anyone epitomize Metsie baseball better than him? A shitload of talent with no rings to show for it. Always injured. Unsteady relationships with fans, ownership, etc. Released when he could’ve been traded for valuable pieces. He is every Met player in a nutshell. And his wife with tears streaming down her beaten face is us, the fans.