The Mets’ broadcast team is simply Amazin’. They dazzle. They are the best. There’s no denying it. GKR is the truth. Gary is beginning his 30th year tomorrow. Mazel fucking tov to you.

Maaaaan do people love talking about how good the Mets are on Opening Day. Do you think maybe it’d be better if we were good on closing day? Ooooops 2007. Ooooops 2008. Well documented fact: in 2007, before the last game, I woke up in a cold sweat after a nightmare that the Mets were down 7-0 and Glavine had already been yanked. It was just a dream. I told people. It was documented. I swore it was real. I called my parents. They told me to relax and that the game would be starting soon. As we all love to remember, the Mets then went down 7-0 and Glavine got yanked. I jumped out of my window to prove I was still dreaming. It didn’t work. I landed in a bush. Should’ve died. 3 years later, the movie “Inception” came out based on this story.

I love Gary. Congrats on 30 years with the Mets. The Yankees only have 27 championships so that makes us a better franchise, right? Who needs the best baseball team when you have the best broadcasting team? I kind of resent Gary (and Keith and Ron) because they bring the overall entertainment value of a Mets game up, which hurts the process of burning the whole thing to the ground and starting fresh. Let’s get Ron and Keith back out there in the Orange & Blue–I know they don’t want to coach because they have the cushy announcing gig but fuck is it frustrating to hear Callaway and the new guys talk pitching pitching pitching while Ronnie just sits in the booth, casually sipping tea–and let’s keep listening to Gary announcing opening day victory after opening day victory, followed by 161 horrific games. Cheers to another 30. You’re a bright spot on the Mike Cameron shade of darkness that is this black soul of a franchise. Sidenote: Mike Cameron is a good guy and a good ballplayer and maybe got the worst case of METS I have ever seen. Not that usual “loses all ability to play the game” METS. That’s normal. Mike Cameron actually got his brains laid out on the fucking field. Too bad that was before Obamacare, because God knows the Wilpons didn’t provide him with insurance. 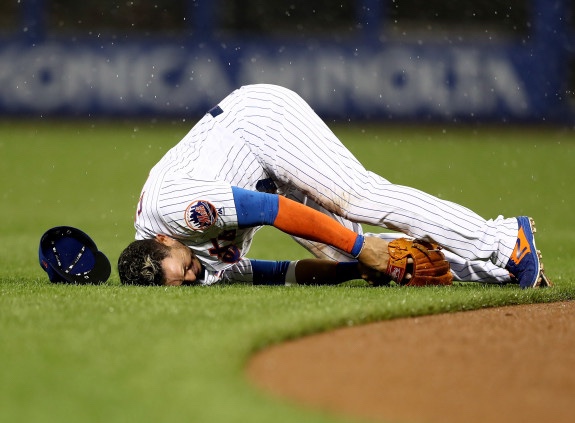 Injured? Tryna get boof’d? Can’t it be both?

This team’s gay. Talkin’ ’bout hope n’ shit. Talkin’ bout meaningful September games. God fucking dammit is Spring Training for anything other than talking about how good our chances are? Talk talk talk like a bunch of chatty, catty gaywads. If this team was any gayer, they’d be tied to the back of a pickup truck getting dragged across Wyoming.

Some say we have a “small window” before our young, contracted arms get paid by teams owned by non-Jews (or “goyims” or “not stingy, dirty, big-nose-having snakes” as they say). BULLSHIT. Our arms suck. Matz and Harvey are dead forever and Wheeler might not even make the fucking roster! The window closed 2 fucking years ago right about the time when Matt and Noah were dressing up like Disney characters or Marvel characters or whatever gayass shit they were doing instead of training. Take that Thor garden gnome and shove it up your ass, gaywads.

Conforto dead. deGrom hurt. Yo strained. What’s the thread between these 3 players? They’re definitively the 3 best players on the team. Niiiice. Our other best player is Thor. He’s coming back from an injury (shocker) and trying as hard as he can to prove he’s fine by firing every pitch in at 100mph. Save some of that gas for all the meaningful September games we’re gonna have, amiright? Great to see the new coaching staff is picking up right where Terry left off with arm management.

Even gayer than all of this were the school shooting baseball caps that they were all wearing. Awesome job, guys. Thoughts, prayers, and baseball caps. We’re saved! I can’t wait until the team is armed. Our arms suck. Some real arms might be nice. Shoot the other team in the face and we might win a game. Hell, give the fans some guns, too, so I can shoot myself in the fucking face and not watch any more of this shit.

So enough fucking talk. This isn’t a happy, hopeful Spring. This is the same garbage franchise with the same black future as always. If this team’s future was any blacker, it’d be tied to the back of a pickup truck getting dragged across Wyoming.