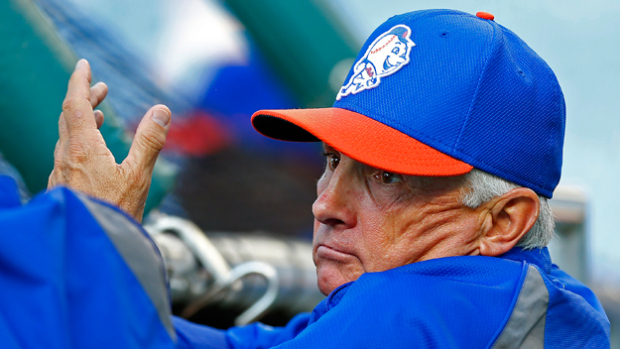 Terry Collins is confused. First of all, we’re winning a game here and there. That’s confusing as shit. But let’s go over the actual things he fucked up.

Collins let COLON swing away with a runner on 1st and 1 out. He took the bunt off with 0-1. UNREAL. UN FUCKING REAL. That right there is a fire-worthy offense. And what’s your argument there, Terry? That he’s not a good bunter? That’s because you haven’t taught him, you fucking mook!

Having only allowed maybe 1 hit all game at this point (maybe 2 at most), Collins had Big Sexy IBB the #8 hitter with two outs and a runner on second. Colon, visibly pissed at this, promptly let up an RBI single to the pitcher. Was it on purpose? No. But did Terry’s lack of faith in his ace disturb the team? Absolutely. He did a LOT to fuck this game up. Luckily the Phillies can’t pitch for shiiiiit and we teed off on em.

Flores was very lucky. The grand salami was skillful, but he should have been TRUCKED at 1st base earlier in the game. Good thing the Phillies ain’t playing for shit and are baby soft. Utley would’ve killed him. Flores doesn’t know how to play 1st and he should’ve been injured on a play where he lollygagged to 1st after (poorly) fielding a grounder and didn’t toss it to Bart.

I attended this game. Colon is riveting on the mound and at the plate. Seeing him get two hits was cool. Seeing the Mets win was cool. But the most exciting part by far is Yo. He is the TRUTH. Sign him up forever. Reyes has brought welcomed energy to the team. But the team goes how Yo goes and everyone knows it. He hits the ball harder than anyone I’ve ever seen. He shoots middle and makes the pitchers shit themselves.